Normal Love are Pauline Boudry and Ben Kaan. Their sound can be described by disco melting live into a riff-rough post-punk minimalism. They met in Nina Hagen’s old rehearsal room in the heart of Berlin-Kreuzberg. This year, the band is ready to enter Berlin´s scene, with new tracks sounding more electronic and decisive than ever. They sing „We Are Not Your Friends“ and use concerts to transmit queer signals from and to the underground. Always danceable, yet concerned with hot topics like love, normalcy, work and performance. Not only with their band’s name, they refer to queer artist Jack Smith who asked: What is normal love? One answer might be found in their song „Suddenly“, where they sing „Every desire comes in drag“. 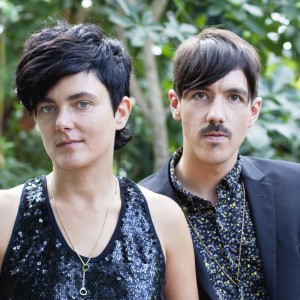 Interviews (in English)
Excerpt from an interview with treztrez Magazine (2012).

What are the elements that categorize the band?

Ink: With all three instruments we try to be as minimalist as possible but still have a composition that is powerful and multidimensional. There are the driving forces of the bass, the melodies of the guitar, the beats, as a mix of disco and electronic with the sounds of a live drum set and the voices of Pauline and Ben that range from melancholy to demanding spoken word.

Ben: For me, it’s Pauline’s remarkable voice and Ink’s beat. The songs are often based on bass lines and it’s my job to come up with some harmonic textures.

Ink: We are queer and we practice ‚under ground’. No, honestly, for me it’s more an atmosphere that evolves in a lifestyle and the other way around. When I find myself in a smoky run down cellar club with glamorous creatures like out of a Jack Smith film flirting with a girl punk band playing its first gig, then I’m surrounded by the sounds of queer Berlin underground

What is the influence of cinema and film in your musical work and live performance?

Ink: This is a very complex matter. Cinema and film is an important part of my life as well as music and therefore influences each other. Many of my musical icons materialized through moving images. It’s a source of inspiration for me.

Pauline: We have all sorts of influences, books, films, or art. Lately underground cinema from Jack Smith or the experimental work of Warhol has been influential, the Theatre of the Ridiculous, as well as No Wave filmmakers like Vivienne Dick.

In terms of inspiration and artistic experience what does Berlin bring to you?

Ben: In its good moments, Berlin is more like an idea than a fixed entity. As a city, it’s a ready – made, not a museum.

Ink: Talking about Berlin I have the tendency to exaggerate. I love it, I hate it, I’ m grateful to have lived here the last 15 years. It’s the soil for many crazy ideas that made me to who I am.

Pauline: Berlin has changed a lot and it is still changing. Every month there is a new building in the centre that is just being finished, or a new club in our area. There is a lot of gentrification, which pushes working-class and migrant communities outside of the new hype areas. So lived from inside, it’s not always great, because we can’t avoid being part of this process. But it’s a city where a lot of interesting people live at the moment, so it gives us the opportunity to have a great exchange.

Like most bands, do you also have any particular rituals before going on stage?

Ben: We had this idea of using glitter for our press pictures. Now we put it on before shows and afterwards, it’s everywhere.

Ink: Yeah, we leave a trail of glitter wherever we go.

What are the common feedbacks you have been receiving after your shows that you could share with us?

Ben: In Paris, people came over and kissed me. I guess, they just wanted to get some glitter from my cheeks…

Ink: In Bern I was saved by my band from being kidnapped by a Swiss country girl who wanted to play Holzstöckeli with me.